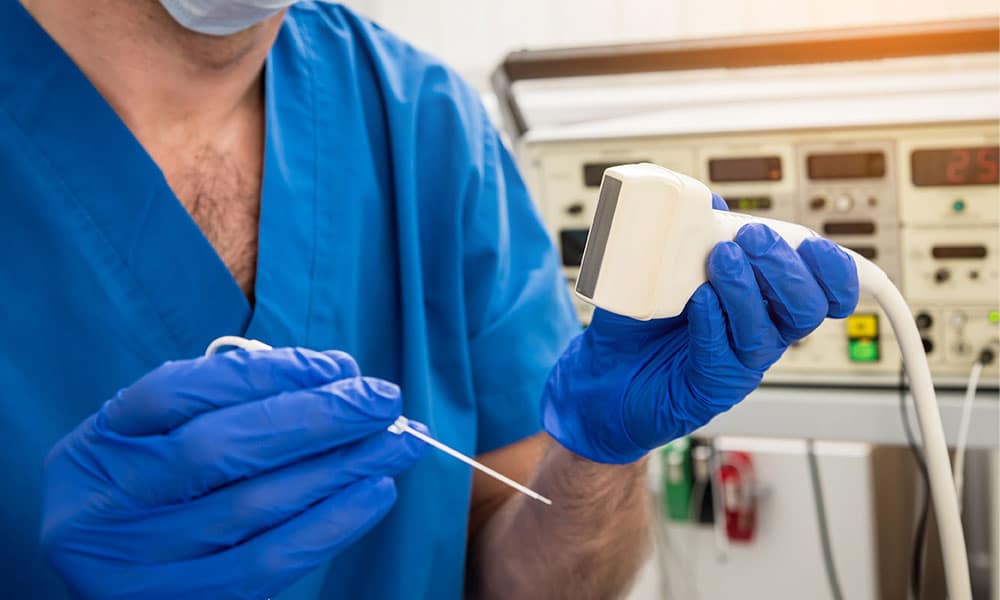 Chronic pain is debilitating, preventing you from managing everyday tasks and reducing your quality of life. Current therapeutic chronic pain management methods include opioid medications and steroid injections. However, radiofrequency ablation (RFA) can offer an effective alternative for pain relief.

RFA is a minimally invasive non-surgical procedure used to help alleviate and control pain by disrupting nerve signals to the brain. It is typically used to relieve joint and peripheral nerve pain. However, it is also a highly effective treatment to reduce discomfort due to benign thyroid nodules.

RFA is a pain management treatment that targets the part of the nerve which transmits pain. It uses pulsed radio waves to create an alternating electric current that generates heat. This heat is then conducted to specific nerves via a specialized needle.

X-ray imaging is used to help the doctor guide this needle, ensuring maximum accuracy during the RFA procedure. The heat is transferred to the targeted nerves, damaging their fibers and preventing them from sending pain signals to the brain.

RFA is a relatively quick procedure, taking between 15 and 60 minutes to complete. Patients change into a hospital gown and lay on a table so that grounding pads can be attached to both thighs. A doctor administers a local anesthetic to numb the affected area before the procedure. Patients may experience mild, temporary discomfort as the electric current passes through the nerve during ablation.

The recovery time for RFA is generally between 24 and 48 hours. After undergoing treatment, you should arrange for someone else to drive you home and, if possible, take the following day off work.

What Conditions Can RFA Be Used to Treat?

RFA can be used to treat a number of conditions, including chronic pain, joint pain, venous insufficiency, and benign growths.

RFA provides long-term relief from chronic back and neck pain by targeting and ablating the nerves, which send pain signals to the brain. It is particularly effective for lower back pain and has the added benefit of reducing dependency on pain relief medication.

A 2014 study demonstrated that RFA significantly reduces pain perception in patients with chronic pain in the lumbar facet joints and sacroiliac joints.

RFA can burn and destroy tissue damage in the knee and hip joints without impacting the surrounding healthy tissue. Used in conjunction with physical therapy, it can help patients regain a wider range of motion in these joints.

A 2022 meta-analysis indicated that RFA offered a safe and effective treatment for patients with knee osteoarthritis.

Venous insufficiency occurs when damaged veins in the leg prevent proper blood circulation to the heart, causing it to pool in the legs. RFA can be used to seal off the damaged veins, redirecting blood flow to healthier veins.

Thyroid nodules are abnormal growths on the thyroid gland that can cause pain and discomfort due to compression on the vocal cords and airway. The alternating electric current created during RFA treatment helps to shrink the size of abnormal cell growths in the thyroid by 30% after 3 months and 90% after a year. After RFA, these broken-down cells are removed by the immune system.

Who is a Candidate for RFA?

RFA is safe to treat nerve pain in both adults and children on an outpatient basis. However, there are several contraindications when it comes to RFA. Pregnant women, people suffering from active infections, or those with an allergy to local anesthetic, are unsuitable candidates.

In addition to treating pain, RFA is a safe and effective treatment for several conditions, including thyroid disorders caused by nodules. If you would like to find out if RFA is the right treatment for you, contact Associated Endocrinologists at (248) 487-8335 or via our online form to schedule an appointment.