Home » Blogs » Thyroid Radiofrequency Ablation » What Are the Side Effects of Thyroid Ablation?

What Are the Side Effects of Thyroid Ablation? 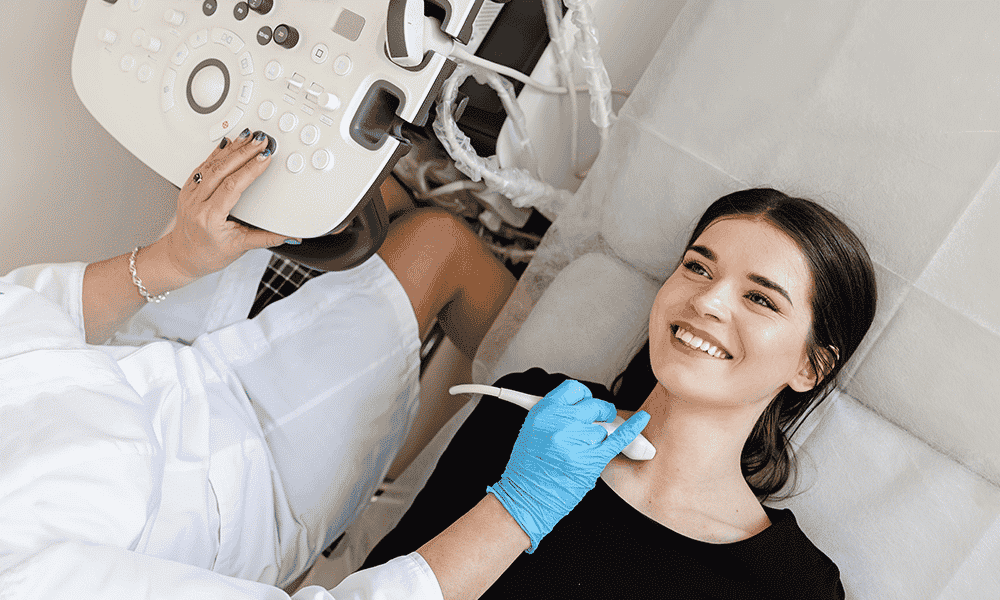 When performed by highly skilled doctors at Associated Endocrinologists, RFA produces minimal side effects. However, as with any medical procedure, it is helpful to understand potential side effects and outcomes to make an informed decision.

Explore the procedural aspects, outcomes, and side effects of RFA to understand the risks and benefits of using RFA to treat your thyroid nodules.

What is Thyroid Ablation?

RFA is a non-surgical procedure that uses electric radio waves to destroy thyroid nodule tissue. During the procedure, a small, 7-millimeter to 10-millimeter electrode is inserted into your thyroid gland using ultrasound guidance.

With this technology, your doctor can pinpoint the exact location of the abnormal thyroid tissue. Once the electrode is in place, a radiofrequency generator is activated, which pushes an electrical current into the tissue. The vibrating tip of the electrode moves slightly to target the nodule tissue while leaving the healthy thyroid cells untouched.

The entire procedure takes 15-60 minutes and only requires a local anesthetic. This means you are awake during the whole process and will likely not experience pain or discomfort while being treated.

It is an outpatient procedure, so you should be able to resume your normal activities immediately after treatment. Although there may be some minor swelling and neck tenderness for several days after treatment, these symptoms are temporary. They can be managed with over-the-counter pain reliever medications and an ice pack.

RFA is a safe and effective alternative to surgery or radioiodine therapy for benign thyroid nodules. However, it is not suitable for all patients. To undergo RFA with Associated Endocrinologists, you must meet the following criteria:

Those with a history of thyroid cancer or who have previously undergone surgery on their thyroid are not good candidates for RFA. Pregnant patients are also ineligible for thyroid RFA.

If you use a defibrillator, pacemaker, or have severe heart disease, RFA is not an ideal treatment because it uses an electrical current in your body.

RFA is not intended to treat thyroid cancer. If cancer cells are detected during an initial biopsy of your thyroid nodule tissue, your doctor will recommend a different type of treatment. Treatments include a thyroidectomy and hormone replacement therapy or radioiodine treatment.

Possible Side Effects of Thyroid Ablation

RFA treatment is well-tolerated with a low risk of serious complications and long-term side effects. Of the reported side effects of RFA, most patients experienced short-term adverse effects that disappeared within one to two weeks.
Common side effects of thyroid ablation include:

Pain or Discomfort During the Procedure

Those who undergo RFA are given a local anesthetic at the electrode injection site. The anesthetic prevents pain and discomfort for most patients with thyroid nodules. Only 2% to 3% of patients experience discomfort, which is easily resolved by increasing local anesthetic dosage.

During RFA, you may experience faintness or a slowed heart rate due to Vagus nerve stimulation. This side effect is rare and fades after the procedure is complete.

Nodule rupture occurs when the electrode tip breaks open a thyroid nodule. This complication is not common, with only 0.17% of patients reporting nodule rupture during RFA treatment.

The risk of ruptured nodules may increase if your practitioner is undertrained or fails to use ultrasound guiding equipment. Schedule your RFA with a highly trained physician at Associated Endocrinologists to avoid this complication.

A hematoma occurs when the blood vessels near the skin’s surface are damaged. Hematomas present in a minority of patients and typically disappear within two weeks.

Hypothyroidism occurs when the thyroid fails to produce the correct amount of thyroid hormones. You may experience irregular periods in women, weight gain, and low sperm counts in men. If you undergo thyroid surgery, your thyroid function may be damaged, causing your TSH levels to drop and requiring you to take thyroid medication.

Permanent hypothyroidism caused by RFA is extremely rare. To further reduce your risk of developing hypothyroidism, your doctor at Associated Endocrinologists schedules you for regular check-ups following your RFA procedure to monitor your thyroid function.

Nerve damage is extremely rare in the case of RFA treatment. This is because it is a non-surgical and minimally invasive procedure. Your doctor uses specialized techniques to mitigate the risk of nerve damage due to RFA, including a transichemic approach (through the center of the neck) and the moving shot method. The moving shot method ensures the electrode is constantly moving to ensure complete ablation of damaged thyroid cells and reduce heat damage.

However, due to the dense bundling of nerves in the neck and the presence of major nerves like the brachial plexus nerve, laryngeal nerve, and vagus nerve, there is a small risk of damage. Nerve damage can lead to vocal changes and numbness in the extremities.

Infections and abscesses are rare side effects of RFA. The small size of the electrode tip and sterile procedures for the RFA process reduce the chances of any type of infection from RFA.

Thyrotoxicosis occurs when you have excessive levels of thyroid hormones in your blood. It can occur due to a nodule rupture; however, studies indicate that patients spontaneously recover within 30 days.

If you experience symptoms of hyperthyroidism, such as weight loss, mood changes, heart palpitations, and difficulty sleeping, your doctor can perform blood tests at your thyroid RFA follow-up appointments at six weeks, six months, and twelve months.

There are no known life-threatening complications or deaths resulting from RFA. It is a safe, effective treatment for qualified candidates with benign thyroid nodules.

RFA is a safe procedure and has a successful outcome among patients cleared for the treatment of around 50% to 80%. In most cases, thyroid nodules treated with RFA shrink by more than 50% and up to 94% over 12 months after the procedure.

RFA is a common treatment for patients suffering adverse effects from benign thyroid nodules, such as an underactive or overactive thyroid. It offers low rates of side effects and complications and high rates of successful thyroid nodule shrinkage within six to twelve months after treatment.

RFA promotes a reduction in the size of benign thyroid nodules to improve your health and wellbeing. With successful RFA, you can lessen or eliminate problems your thyroid nodules are causing, such as difficulty swallowing, uncomfortable pressure on your windpipe, shortness of breath, and unsightly swelling.

Obtain Treatment for Your Thyroid Issues

We have locations in Farmington Hills and Clarkston, allowing us to serve areas throughout Wayne and Oakland counties.

Schedule a telehealth visit or an in-person appointment with a healthcare provider at Associated Endocrinologists to discuss your thyroid concerns and treatment options today. They can assess your thyroid and provide medical advice about any potential adverse events related to thyroid RFA.

How to Prepare for an Ultrasound

An Introduction to Common Thyroid Disorders

Is Thyroid Radiofrequency Ablation a Good Alternative to Surgery?